Midwest farmers are on track for a record-high harvest, despite a year of extreme weather 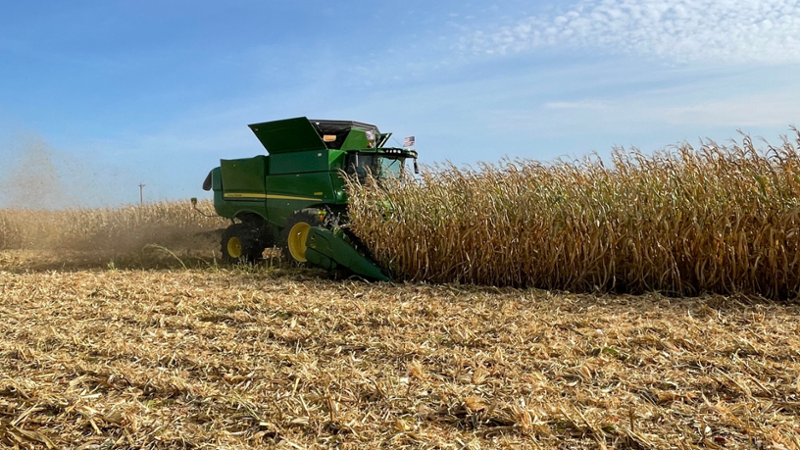 In August, nine inches of rain dumped on one of Randy Aberle’s fields of corn and soybeans near Gibson City, Illinois.

“We had some areas in those fields that the water was four feet deep,” he says.

Luckily, he says, those fields have enough slope that the water drained off within a day and a half. But then came the diseases.

“Not only do we have the cool wet diseases, we have the hot and dry ones,” he says. “Plus there’s some new ones that have come in and have really taken off this year as well.”

His soybeans, on the other hand, are thriving.

“From what we’re seeing, it’s probably some of the best yields we’ve ever seen on beans,” he says.

Farmers across the Midwest are on track for near record-high harvests of corn and soybeans, according to the U.S. Department of Agriculture.

Meanwhile, U.S. Secretary of Agriculture Tom Vilsack issued a natural disaster designation on Oct. 20 for farmers in many counties across Illinois, including Aberle’s, citing “sufficient production losses” due to weather issues.

It wasn’t just Illinois that was hit hard by climate change-induced weather patterns.

“This is going to be a year where we look back and remember the western Corn Belt having more troubles than the eastern Corn Belt with respect to available moisture,” says atmospheric scientist Eric Snodgrass.

Intense drought conditions in the western United States made their way to western Iowa, he says, leading to some thirsty crops.

“That was, I think, a big stressor for a lot of growers in the western part of the Corn Belt this year,” he says.

These variable weather patterns — where some areas get too much rain and others too little — are becoming more common with climate change. That’s the biggest threat Midwestern farmers face over the next century, says Snodgrass.

Aberle, the Illinois farmer, says he’d already noticed changes in the weather patterns before this year. He’s had trouble getting in the field in time to plant, for instance, because of wetter springs.

“It seems like our windows are getting smaller (for) when we can get in the field,” he says.

He says it’s important that farmers prepare for potential flooding events like the one he experienced this year.

“Having proper drainage field tile and whatnot,” he says,”to be able to get water off as fast as we can is important.”