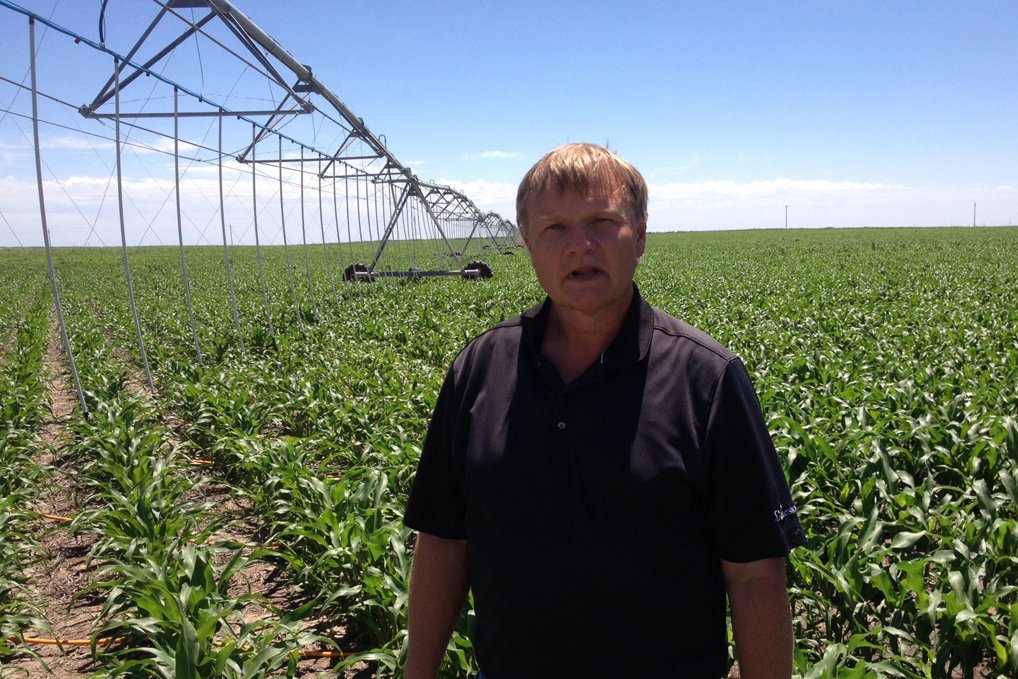 The economy of western Kansas is based on the Ogallala Aquifer. But that ancient underground water supply is being rapidly depleted. The Kansas Water Office is teaming with forward-looking farmers in an effort to demonstrate that new irrigation technologies can reduce the demand on the aquifer without sacrificing crop yields.

From mid-May through the end of August, the sound of irrigation pumps pulling water from deep underground to nourish thirsty crops is heard almost nonstop on farms across southwest Kansas.

But this year, Tom Willis is pulling a lot less water than normal from some of his irrigation wells - and he's doing it intentionally. Willis is one of three western Kansas farmers partnering with the Kansas Water Office on a demonstration project called Water Technology Farms.

Standing next to one of his pumps in a field 15 miles southwest of Garden City, Kansas, Willis said he can tell just by listening to it that the pump engine isn't pulling as much of a load as in years past.

"Normally, we'd be running about 300 gallons more a minute than what we're running right now. You can tell, that engine's hardly running," Willis says.

He's able to water this milo field while pumping the well more slowly than usual thanks to a relatively new type of irrigation. The generic name for it is mobile drip. The trade name is Dragon Line.

Monty Teeter, of Teeter Irrigation in Ulysses, Kansas, came up with the idea behind Dragon Line about seven years ago.

"It's real important to me that we try to save every drop we can," Teeter says. "Our motto is â€˜Making every drop of water count.'"

Dragon Line is based on the center-pivot irrigation system already present in most irrigated fields. Instead of nozzles that spray the water onto the crop from above, this system has bright orange hoses that drag slowly along the ground as the system moves through the field. The hoses are dotted with pressure-controlled emitters that let out just a trickle of water directly onto the ground between the crop rows.

Teeter said a U.S. Department of Agriculture study in the Texas panhandle found that more than half of the irrigation water sprayed onto bare soil simply evaporates.

"So whenever you see a pivot running with dark soil behind it, or wet soil, we're evaporating that water," he says. "When you think of all the water that we pump out here in western Kansas, if we're able to save 25 percent of that water, it would be huge. It would make our aquifer last a lot longer."

While test plot results are not conclusive, Aguilar thinks a 20 percent savings would be a conservative figure. What's more, he said there was more moisture in the soil after harvest on the mobile drip plot - as much as an inch of rain would provide.

"That would allow the plants for the next season to promote a deeper root system for the crop to be able to mine that water later on," Aguilar says.

A crop with a deeper root system is heartier and more productive - and less sensitive to drought, according to crop consultant Loren Seaman.

He said the Dragon Line system itself appears to encourage deeper root development than with traditional irrigation. That may be because water from spray irrigation only penetrates 3 to 4 inches into the soil, he said.

"But you put the Dragon Line out there every 30 inches, and it will penetrate down to 12 to 13 inches," Seaman says. "And every time that penetration is better, your root system is going down farther. The plants build a bigger root system."

But farmers aren't likely to invest in this technology until they see large-scale field trials demonstrating that their crops will do just as well using less water.

Willis is hoping to provide that proof.

Willis said the fields look good so far, but it's been a very wet year.

This story was reported by Heartland Health Monitor.