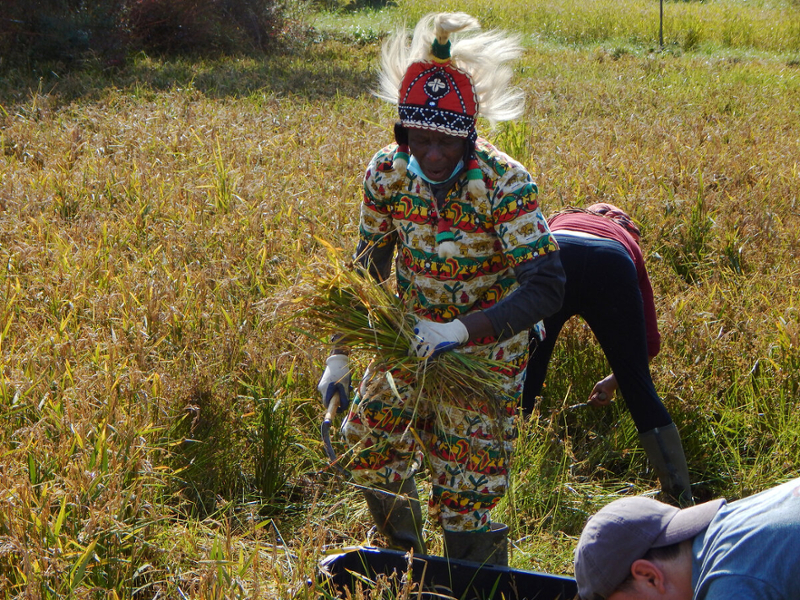 Nfamara Badjie harvests rice on his farm in the Hudson Valley. (Karen Michel)

Musician Nfamara Badjie came to the United States in 2005 from his native Gambia to perform and give drumming workshops. He didn't anticipate staying. He was a famous musician back home, who'd grown up rice farming and drumming in a small village, as his ancestors had done. Dawn Hoyte changed his plans.

A dancer, Hoyte attended one of Badji's workshops. By 2013 they'd become a couple, married, and were looking for a bigger home in the Hudson Valley of New York where they could house their combined families. They found a house that seemed large enough and was sited on what's politely called a wetland. Badjie wanted a place to grow rice, as he'd done back home. Hoyte, who was born in Queens, N.Y., was skeptical.

Enter agronomist Erika Styger of Cornell University. She'd spent 15 years in West Africa, specializing in rice. She pointed out that "There's all these different environments where you can grown rice. You won't find the same environment here as in Gambia, but...they can adjust."

It's been a challenge. Calling themselves the Ever Growing Family Farm, Badjie and Hoyte — with Styger's counsel, along with some grant money, and lots of help from family and friends — have become what's thought to be the first commercial rice farm in New York. Though commercial is relative. With just a few acres and a bit more than a dozen paddies, a good year yields 1,000 pounds. To harvest it takes many hands.

Traditionally, it also takes drummers, celebrating and encouraging the volunteer harvesters. Some have helped before. It's a youngish crowd, some barefoot, others in knee high rubber boots. All hold scythes with scary sharp blades.

"It's truly one of the most joyous experiences we had last year!" said Rachel Brotman, who is back for a second time.

Badjie joins them, wearing an outfit printed with red, green and yellow maps of Africa and meandering gray elephants. His cap is festooned with jutting gray sheep hair.

This year, Dawn Hoyte figures they're growing at least a dozen different varieties of rice: from Italy, Chile, Nepal, Japan, West Africa and the United States. As Hoyte recounts, at least one has quite the circuitous geography. Pointing to a paddy, rice tassels protruding, she says that it contains "...rice the supposedly enslaved Africans carried in their hair to South Carolina, then Trinidad, and then some people brought some seed to Philadelphia." And now it's growing in New York's Hudson Valley, on a Gambian farm.

Selling for $8 a pound, even the family scarcely eats any of it. Badjie's son Modou confides that his father sneaks it, however.

The final milling of this year's crop isn't yet done, but it's anticipated that the yield will be quite small. The torrential rainfall is the suspected culprit. Dawn Hoyte figures that may not be so terrible, that perhaps they can pioneer viable varieties for the Northeast.