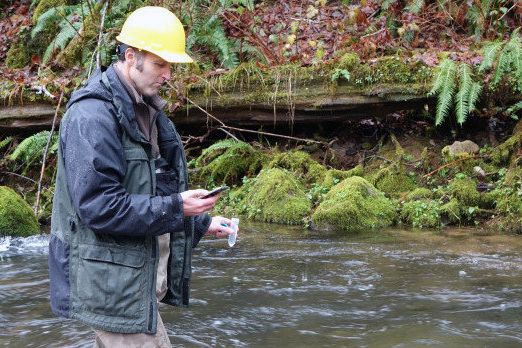 Biologist Shaun Clements stands in the winter mist in a coastal Oregon forest, holding a small vial of clear liquid.

"We should be safe mixing it now, right?" he asks his colleague, Kevin Weitemier, above the sound of a rushing stream a few feet away.

Weitemier brings a second vial, full of stream water. In deliberate, seemingly choreographed movements, they pour the liquid back and forth between the small containers, mixing two, then three times - never spilling a drop.

The two move out into the cold stream with the vials. Clements is in the main stream, while Weitemier stays closer to shore. At the same moment, they tip the containers on end. Two trillion particles of lab-created DNA fall into the rushing water. It's an experiment to figure out how far and how quickly environmental DNA â€“ or "eDNA" â€“ travels in different kinds of streams.

Occasionally a big idea comes along that promises to revolutionize the world â€“ think about things like self-driving cars. For biologists â€“ especially those who work with fish and other aquatic plants and animals â€“ eDNA is one of those big ideas. The technology is starting to revolutionize how we protect native animals and ensure invasive species don't take hold.

The easiest way to understand eDNA is to imagine yourself relaxing in a steamy hot tub. As you're soaking, a bubble splashes water into your mouth and you spit it out. A day's worth of dead skin sloughs off. Finally, toasty warm, you get out of the tub.

The you-flavored broth left behind is full of your DNA. It has become part of the larger environment. And long after you're gone, that DNA could be detected - if someone knew what to look for.

The same holds true for any organism in any body of water.

"All these little critters out there, they're shedding DNA from their skin cells, urine, feces," Clements explains.

Clements works for the Oregon Department of Fish and Wildlife. He says Oregon has a lot of waterways and the state doesn't have the resources to fully monitor endangered fish, look for invasive plants or check in on all the other native species, potentially including mammals like river otters, beavers and bats.

With eDNA, doing all of this could get much cheaper and easier.

"Just by taking a water sample, you can tell somewhere in basin above you, there was this range of species and something about their relative abundance," he says.

And this potential has fisheries biologists excited for what lies ahead.

Young says biologists and fisheries managers in the West are already really good at using eDNA to find the threatened species bull trout in small streams. That's because he and other scientists have been working for years to figure out exactly what it means to find bull trout DNA in a water sample. They know what a positive detection indicates about bull trout presence and relative population numbers.

"But let's say we're trying to sample to detect western pearl shell mussels in larger stream... or Pacific lamprey, or trying to find invasive species in reservoir," Young says. "Each water will come with its own probability of detection that's specific to that species and habitat pair."

DNA will travel differently depending on the habitat and the species. Where and how much DNA there is can be affected by the speed and direction of the water, the amount of sunlight, the number of DNA-eating bacteria and the season it is. And this is only a partial list. There are multiple variables that still need to be tested.

Scientists are only really beginning to scratch the surface. Even so, the technology is beginning to prove its worth for bull trout monitoring in the West and for keeping track of invasive Asian carp, which pose a huge threat to the Great Lakes region.

"We don't have to know everything about it [eDNA] to make it useful - as long as we're accounting for errors," says Caren Goldberg, an ecologist at Washington State University.

The work of refining the science of eDNA is what Clements is doing out in the woods near Alsea, Oregon. After dropping the synthetic DNA into the stream, he and Weitemier jump in their car and bounce along a logging road to the pink flag marking their fourth collection site, about a half-mile downstream.

"I wasn't sure I was going to be the person standing in the stream, but I thought there was a possibility," says Weitemier, who drew the proverbial short straw.

Like other scientists in place at the team's three other collection sites, Weitemier will be thigh-deep in the icy-cold stream for the next hour, taking water samples at regular intervals to see if they can capture any of the DNA released upstream.

"There was a lot of DNA in there â€“ trillions of DNA particles. But that was being diluted into millions of liters of this stream," says Weitemier. "So we might only recover a very small proportion... especially [where] I was sampling at the farthest point from where we put it in."

The samples will be taken back to the Oregon Hatchery Research Center to be filtered. Then the filters will be taken to the Center for Genome Research and Biocomputing at Oregon State University, where Weitemier works. Even if they did capture the synthetic DNA, other issues could arise.

"The test we use to recover them may not be sensitive enough to see them. But we don't know. That's what we're testing," he says.

But if all goes as planned here, and OSU is able to detect the DNA, Clements will repeat this experiment throughout Oregon. He'll use the information he gleans from the field tests to figure out how the agency can start using eDNA to monitor and manage fish and wildlife.

"Scientists always say more data is better, managers always say we need to know now," he says. "So, we anticipate that along the way we'll learn a lot."