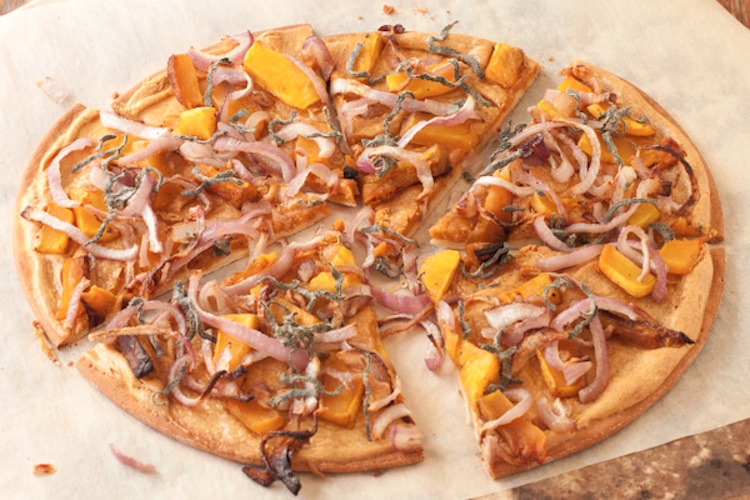 I am grateful to Vegan Coach for giving me the general idea for this recipe. I took her list of ingredients, played with it, measured, played some more, and now have the definitive vegan cheese pizza sauce.

For the pizza pictured above, I used a frozen gluten-free pizza crust, which would be vegan except for the egg whites. (For a vegan crust, see Natalie Rae Good's recipe.)

With a frozen crust, just let it thaw while you make the sauce andÂ sautÃ© any veggies you want on top. For a gluten-free crust mix, follow package directions. I usually pre-bake for about 10 minutes on parchment on a baking sheet. Then I top the pizza and transfer it to my hot pizza stone while still on the parchment. It bakes at least 10 minutes with the toppings on it, but usually more like 15 or 20.

Notes: You can use this same sauce recipe and add more of the water to make a dip, a pasta/casserole sauce or even a thin dressing. If you want a truly "white" sauce, omit the smoked paprika, which turns it into a nacho cheese color. If you want a more traditional pizza, you can put marinara sauce on the crust first, then this, then your toppings. In that case, ease up on the smoke flavor when making the sauce.