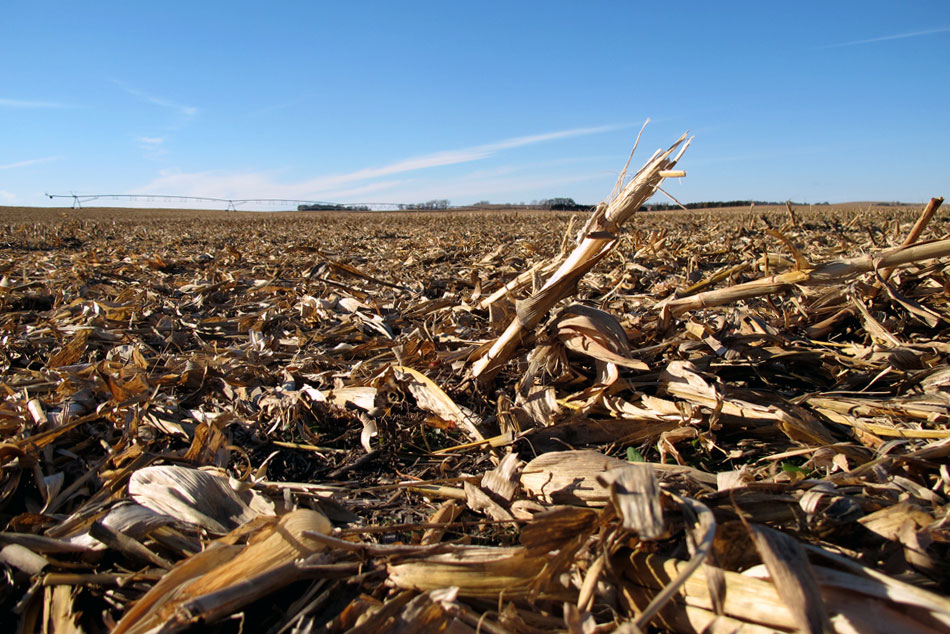 The value of farmland is riding high, and so are the taxes farmers pay on that property. But as those numbers remain steady, the actual income farmers make from the land has tumbled, leaving some farmers to push for a discount on their tax bill.

Larry Tegeler raises corn and soybeans along with some cattle in northeast Nebraska. He started farming about 30 years ago, and the first land he ever bought was a field near the small town of Meadow Grove.

On a windy fall afternoon, Tegeler looked over the 160 acres of rolling, sandy soil he purchased in 1987.

"At that time we were just coming out of kind of a financial collapse that we had here in the early 1980s," Tegeler said. "I brought this quarter for $600-an-acre."

A lot has changed since then. Today, Tegeler estimates the same farm would bring $8,000-$9,000 per acre. These days, it's a million-dollar farm.

That's the kind of wealth farmers who own land built up as land values spiked over the last 10 years. And, because their land is worth more, farmers are also paying a lot more property taxes.

In Madison County, Nebraska, where Tegeler farms, nearly $20 million in property taxes were collected from agricultural land in 2014, three times the property taxes paid on farmland in 2004.

"You didn't hear anybody complaining too much, you know, when we had $7 (per bushel) corn," Tegeler said. "And now we're having a tougher time paying for it."

Farm income has plummeted over the last couple of years. Grain prices currently are break-even at best, and farm debt is on the rise. Even with government payments and crop insurance, some producers will struggle to turn a profit.

There's an asymmetry here and people get upset because [land] values aren't falling as fast as they think they should.

"There's an asymmetry here and people get upset because [land] values aren't falling as fast as they think they should," said John Anderson, who teaches public finance at the University of Nebraska-Lincoln.

Anderson says property taxes are important because they're the main source of funding for local services like schools, police, and fire.

Some states base property tax rates on soil type or income potential. Others go by rental rates or recent land sales. However they're calculated, the results are similar across the region. Property taxes are costing farmers, and in several states powerful ag groups have been lobbying for cuts. But Anderson believes it's a reasonable source of funding.

"Property owners with more property wealth have a greater ability to pay," Anderson said. "And we generally think that's a good principle of taxation – that those with greater ability should shoulder a larger share of the burden."

Farm-heavy states like Kansas and Illinois are facing big budget deficits. Cutting state revenue likely isn't in the cards, even if it would please farmers.

In Nebraska, legislators are​ looking at changes. But state senator Kate Sullivan says relief for farmers would leave a big hole in school funding.

"Where will that money come from? It's either going to have to be additional new sources of revenue, which quite frankly doesn't set well with a lot of people, or you simply take that revenue away from other programs that are currently being supported by state dollars," Sullivan said.

Farmer Larry Tegeler isn't looking to slash school budgets. He was actually a math teacher before he was a farmer.

Still, he and the state's biggest farm organizations like the Farm Bureau, say they're bearing too much of the property tax burden. Even in a farm state like Nebraska, though, property tax cuts could be hard to pass.

"There aren't that many of us out here anymore," Tegeler said. "We don't have very many votes."

If the farm economy turns around or if land prices start dropping, changes in property taxes could move to the back burner. Neither of those are likely in the short term, meaning farmers will push to keep their most valuable asset – their land – from becoming a financial burden.