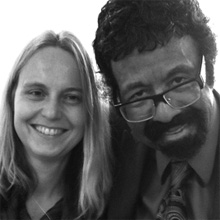 Monika Herzig holds a doctorate in music education from Indiana University, where she teaches as a member of the Arts Administration faculty. As a recording artist for Owl Studios and touring jazz pianist, she has performed at many prestigious jazz clubs and festivals worldwide. Groups under her leadership have toured Europe and Japan, and opened for acts such as Tower of Power, Sting, the Dixie Dregs, Yes, and more. Her music has received awards from DownBeat Magazine, ASCAP, and Billboard.

Nathan Davis is currently director of the University of Pittsburgh Jazz Studies Program. He is founder of Pitt’s annual jazz seminar and concert, which marked its fortieth anniversary this fall. It is the longestrunning jazz event of its kind in the country and is considered one of the most successful university jazz programs in the world. Nathan received his bachelor’s degree in music education from the University of Kansas in 1960. In 1974, Nathan earned his phd in ethnomusicology from Wesleyan University. After college, Nathan served in the us Army’s 298th Army Band in Berlin, Germany and obtained a European discharge to remain in Europe, working mainly with Pittsburgh-born drummer Kenny Clark. While in Paris, Nathan taught, performed, and recorded with some of the era’s most elite jazz stars – including Donald Byrd, Eric Dolphy, Woody Shaw, Art Blakey’s Jazz Messengers, Bud Powell, Ray Charles, and Johnny Griffin. He enrolled at the Sorbonne in 1967 to study ethnomusicology. He studied composition with French composer Andre Hodeir in 1968, and has composed over two hundred original compositions – including film scores, four symphonies. In 2004, he premiered his opera, Just above My Head, based on the book by James Baldwin. He has published four books, including a scholarly text on the history of jazz. Nathan has recorded over twenty albums and several videos, with such groups as Roots and the Paris Reunion Band. He is founder and editor of the prestigious University of Pittsburgh International Jazz Archive Journal. With a grant from Gulf Oil Corporation, he recorded and produced an LP entitled Nathan Davis: A Tribute to Dr. Martin Luther King, Jr., for the annual “Hand in Hand” celebration of Martin Luther King Week. His recording I’m a Fool to Want You – with Grover Washington, Jr., as a special guest – can be found on the Tomorrow International, Inc. label. In 2005, Davis released The Other Side of Morning and most recently released Parisian Hoedown, also on the Tomorrow International, Inc. label.

JB Dyas has been a leader in jazz education for the past two decades. Formerly director of jazz studies at New World School of the Arts and executive director of the Brubeck Institute, Dyas currently serves as vice president for education and curriculum development for the Thelonious Monk Institute of Jazz in Los Angeles. He received his mm in Jazz Pedagogy from the University of Miami and phd in Music Education from Indiana University, and is a recipient of the prestigious DownBeat Magazine Achievement Award for Jazz Education.

John Edward Hasse is a music historian, pianist, author, and record producer. He serves as curator of American Music at the Smithsonian Institution’s National Museum of American History, where he founded the Smithsonian Jazz Masterworks Orchestra, the acclaimed big band, and Jazz Appreciation Month, celebrated each April in over forty countries. Hasse is the author of Beyond Category: The Life and Genius of Duke Ellington; editor of Jazz: The First Century; co-editor of Jazz Changes; and co-producer and co-author of Discover Jazz. A contributor to the Wall Street Journal, Hasse has lectured on leadership and music on six continents.

Lissa May is associate professor at the Indiana University Jacobs School of Music and holds dme, ms, and bme degrees from Indiana University. Noted for her work in music education and jazz, her publications include compositions for concert and jazz bands and articles in JRME, JHRME, and the IAJE Research Proceedings.

Brent Wallarab is a faculty member at Indiana University’s Jacobs School of music where he teaches in the jazz studies program. Wallarab has worked professionally as trombonist and arranger for Wynton Marsalis, Count Basie, Bobby Short, Ray Charles, and Jack Sheldon, among others. Appointed specialist in jazz to the Smithsonian Institution, Wallarab has transcribed and edited hundreds of important jazz scores and served as lead trombonist for the Smithsonian Jazz Masterworks Orchestra for nearly twenty years. He co-leads the Indianapolis-based Buselli-Wallarab Jazz Orchestra.

David Ward-Steinman is a composer, pianist, adjunct professor at the Indiana University Jacobs School of Music, and distinguished professor emeritus from San Diego State University where he chaired the composition division, founded and directed the Comprehensive Musicianship Program and also the New Music Ensembles. A winner of major composition prizes, his commissions and premiers include those from the Chicago Symphony Orchestra, Joffrey Ballet, San Diego Ballet, California Ballet, Japan Philharmonic, Seattle Symphony, New Orleans Philharmonic, and the San Diego Symphony. Ward-Steinman is featured on numerous recordings as a composer, pianist, and polystylistic improviser. 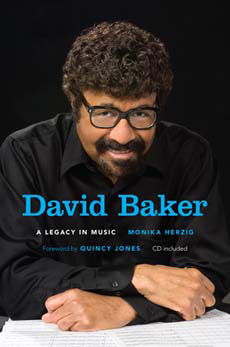 David Baker: A Legacy In Music by Monika Herzig, explores David Baker’s artistic legacy, from his days as a jazz musician in Indianapolis to his long-term appointment as Distinguished Professor and Chairman of the Jazz Studies department at Indiana University.

Featuring enlightening interviews with Baker and a CD of unreleased performances as well as a variety of samples of Baker’s compositions, this book brings a living legend into clear view.