Inauguration 2017: Cast On, Carry On, And Keep An Open Mind

The Pussyhat Project is one creative form of political engagement. Stewart Huff’s comedy is another. 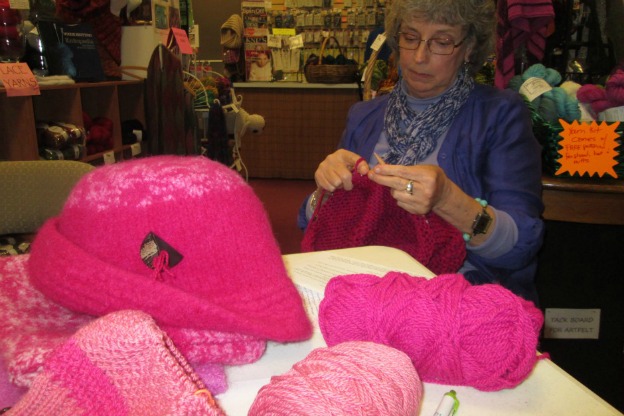 Linda Boyle is one of many local activists knitting pussyhats to send to the Women's March on Washington.

“I just mailed off a batch of pussyhats to DC, Donna mailed some to Seattle, and Dana mailed some to Cincinnati. So I’m excited! There’s going to be Hoosier pink hats all across the United States!”

Knitters in Bloomington, Indiana join thousands across the US making pink hats to wear at or send to those participating in the Women’s March on Washington—or one of the many satellite events–on Saturday, January 21st.  The Pussyhat Project is one creative form of political engagement. Stewart Huff’s comedy is another. The Georgia-based comedian is marking inauguration weekend by recording a new CD at Bloomington’s Comedy Attic. Huff’s latest act tries to examine what causes a mind to close. Sometimes when he performs, he’s pleasantly surprised to find that his act may have pried one open.

“A guy said to me after the show last night, ‘You and I are not on the same side politically, but I like the way you presented that; you gave me some stuff to think about.’ And I thought, ‘WOW! That’s a victory right there, you know?’

We invited Stewart Huff into the café on the eve of his gig at Bloomington’s Comedy Attic, which continues each night through Saturday the 21st.

Knitting hats to wear to the Women's March on Washington, Bloomington women join thousands nationwide who are taking up needles to stand up for their rights.

Comedian Stewart Huff addresses the history of close-mindedness in his new comedy special.