Bloomingtonians run away with the circus, then bring the big top back home. And veering off the beaten track to celebrate the season at a Shelbyville drive-in. 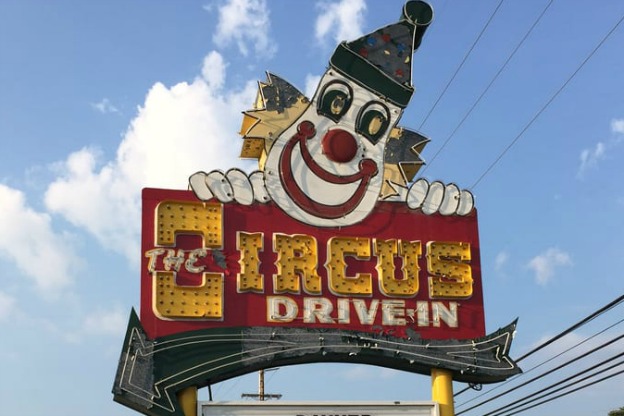 It began as the classic escape fantasy. Bloomington teenager Henry Gentry ran off with the circus. Well, technically, a trained dog show.

Learning the ropes on the road, Henry Gentry came home and got his own act together, training stray dogs he’d found wandering the streets in his family’s barn. He persuaded his brothers to buy into his scheme, and they hit the road in 1883.

In time, Gentry’s Equine and Canine Paradox became Gentry Brothers Famous Shows, the largest traveling circus in the country. In 1916, they cashed out. It took almost 70 years for the circus to come back to Bloomington.

[pullquote source=””]I came to Indiana in 1983 with a high flying trapeze and a burning passion to fly.[/pullquote]

A century after Gentry headed out on the road with his dog-and-pony show, Bernadette Pace began raising up a new generation of circus performers in her own backyard.

In the first of a two-part series, WFIU’s Aubrey Seader heads back to the nineteenth century to explore the history of the circus in Bloomington, and picks up the thread in the early 1980s, when a revival began that spawned a new generation of troupers.

In the era of Netflix, getting your kicks at the circus is, admittedly, a bit of a forgotten pleasure. But Hoosiers who seek out entertainment of a certain vintage also turn up at the Skyline Drive-In in Shelbyville. For a few years now, movie lovers in Central Indiana have been celebrating the holidays like it’s 1959. Betsy Shepherd veers off the beaten track for this seasonal story.

Running Away With The Circus, And Bringing It All Back Home

In 1883, a Bloomington teenager grew a legendary circus from a trained dog act. 100 years later, a backyard trapeze rig launched a new generation of performers.