Vis-à-vis: Lotus, Columbus, And The Rest of the World

The surprising influences on international musicians at Lotus, and the concert-going pedigree of a young attendee. Plus, legendary Columbus design goes forth. 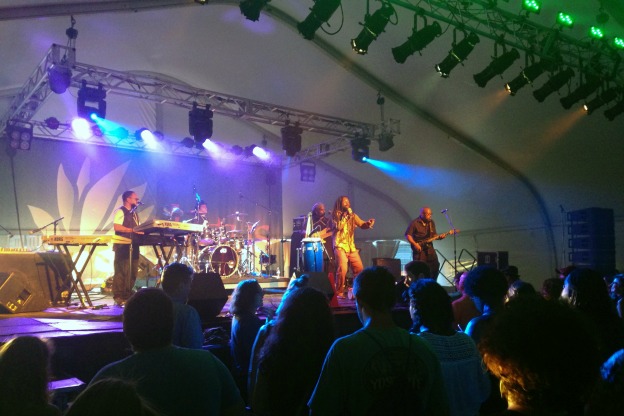 I have been going to concerts and music festivals since I was thirteen.  My first concert was Lollapalooza in 2011. I think total I’ve seen 139 bands live. I keep a list in my phone.

Last weekend’s Lotus Festival, on the other hand, was a brand new experience for this eighteen-year-old. We see Bloomington’s annual world music and art festival through the eyes of an IU freshman who’s already seen plenty of live music in her short time. Alexa Bruetman gives us her perspective on taking in new sounds, turning on to other cultures, and paying for the privilege. Also—

When we met there were a lot of similar artists who were inspiring, but now I feel maybe more inspired by musicians who make completely different music. I don’t know if I can come up with an example. Oh, maybe D’Angelo?

How the American R&B artist informs the music of minimalist Swedish/Icelandic duo My Bubba is a mystery, but when the singer-songwriters came to the Lotus Festival last week, they were on a mission to make contact with the musician, who wasn’t incidentally, on the Lotus bill.

And, the cross-pollination of cultures at Lotus anticipates the diversity of visions that will intersect in Columbus next week for the opening of Exhibit Columbus. The initiative will bring designers and architects from around the world into dialogue with the city’s stakeholders in an effort to preserve and further the city’s identity as a design capital.

The Swedish/Icelandic folk duo, My Bubba, brings artistic intimacy to its audiences through minimalist folk music -- and bacteria samples.

Architects, designers, and community stakeholders convene for the launch of Exhibit Columbus, to further the city's identity as an aesthetic standard-bearer.

After Lollapalooza And The Warped Tour, Alexa Tackles Lotus

Bloomington's Lotus Festival just blossomed for its 23rd year, but it's the first time for Alexa Bruetman, freshman at IU and avid concert-goer.