Nurturing Great Performances At The BCT, Lepore’s Quest For Gould

The man who sought to tell the history of the world in overheard conversations, and the comeback story of a theater finding its niche on the national stage. 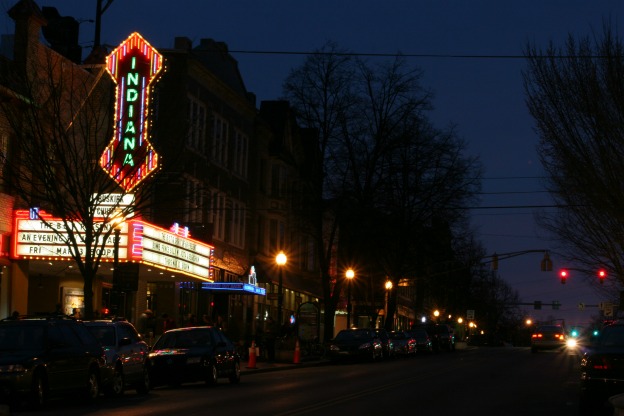 The Buskirk Chumley Theatre on Kirkwood Avenue in Bloomington, Indiana.

“Imagine Bloomington without the Buskirk-Chumley Theatre. There’s a lot less to do in town. But there’s also a lot less opportunity for entrepreneurial artists to have the possibility for success.”

Danielle McClelland has stewarded the renaissance of Bloomington’s Buskirk Chumley Theatre since its restoration at the turn of the century. We mark the occasion of a performance there by some up-and-coming New York-based troupers by reflecting on the venue’s evolution. Aubrey Seader explores the meaning of Pig Pen Theatre Company’s booking at the Buskirk Chumley within the context of the national theatre scene. But first, we speak with a historian ensnared by the legend of a man who claimed to be writing a multi-million word transcription of conversations he’d overheard–

“I just kind of gotten bitten by curiosity by that. Because Gould’s project is so similar to my own commitments as a historian— he was trying to correct the asymmetry of the historical record.”

Historian Jill Lepore’s newest book is about Joe Gould, who is credited with coining the term “oral history.”

“He wanted to write down what people say, so that ordinary people’s lives could be preserved.”

Lepore is professor of American history at Harvard University and a staff writer for The New Yorker magazine. Her essays delve into American history, law, literature, and politics. Along with Joe Gould’s Teeth, her most recent books include The Secret History Of Wonder Woman, and Book Of Ages: The Life And Opinions Of Jane Franklin. She visited Indiana University in March 2016 to deliver a pair of Patten lectures, and spoke with David Brent Johnson.

Listen to the entire episode from the arrow above the photograph.

A show by up-and-coming performance troupe Pig Pen Theater Company at the Buskirk-Chumley highlights the venue's role as an incubator for emerging talent.