A Stop On The Bloomington Open Studios Tour: Elizabeth Busey 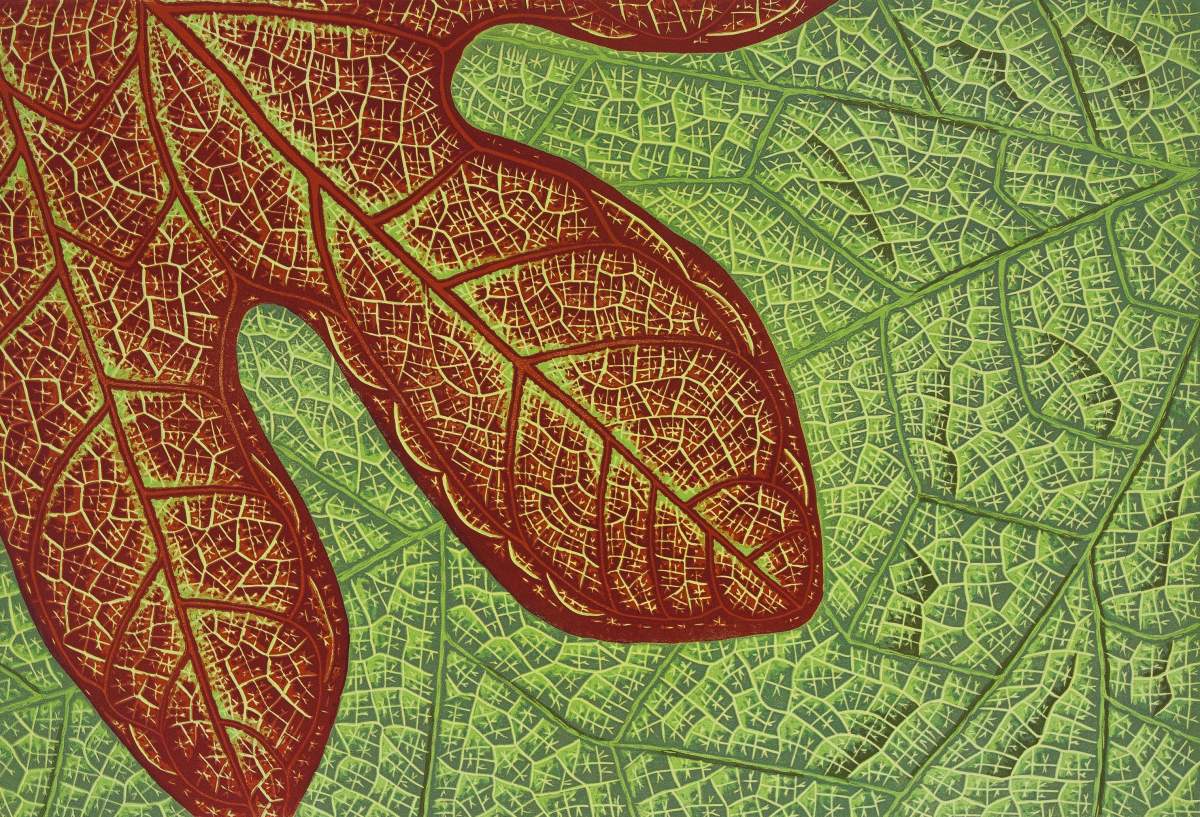 It's the fourth year for the Bloomington Open Studios Tour, a self-guided tour that allows visitors to get a view into the lives of 45 visual artists working in garages and basements all over Bloomington. For participating artist Elizabeth Busey, the weekend also marks the opening of a show of her newest linoleum block printsknown as linocutsat the Bloomington Convention Center Art Gallery.

I visited the printmaker in her studio in the basement of her Bloomington house, where she works on an etching press made out of recycled steel. Busey's self-made press is an object lesson in the unconventional and optimistic spirit that has guided her art career.Â She came to Bloomington in 1994 with her husband, a cognitive psychologist at Indiana University. She stayed home to raise her two children and got into art with them. She had a couple of master's degrees but had never studied art formally. Once her children were both in elementary school, she started taking classes. She studied with Ed Bernstein, longtime head of the printmaking department at IU.

"I loved it," Busey avers. "The only problem was that I was doing the class midday, hauling everything to the stadium to where my car was and rushing home to kids who were just getting home from school, and I was needed. So I told Ed and my husband that I was going to go make art in my basement."

For a printmaker, that's not so easy. The gear requires a pretty big investment.

"That was a real decision point," Busey recalls.Â "But the family motto is 'how hard can it be?' In this case, my husband went online, and found plans for an etching press from a guy in Great Britain, purchased the plans, and we started going out to the junkyard looking for well pipes that were thick enough and straight enough to be used to create the press."

My feeling is that a lot of these places touch something familiar, even if we've never been there ourselves, and that's what I'm trying to capture.

Having christened that press on her 40th birthday, Busey's artistic practice is going strong almost a decade later. Her new series, "Considering the Beloved," exploresÂ fragile wetlands.Â Largely abstract, many of Busey's images register as landscapes seen from a distant vantage point or microscopic images of plant or animal life. When asked to trace the source of her imagery, Busey explains,

I am a traveler. I love to travel. I've been to most of the continent of North America, some in Europe and Australia, so I've seen a lot of different places, and I'm sort of an amateur scientist in terms of geology and botany. When I am not looking at leaves close up or thinking about leaves close up, I cruise around on Google Earth, because I don't have enough resources to have my own plane.Â Google Earth is amazing, you can look over places like estuaries, coral reefs, these are places just just meters off of the sea level and are in danger for multiple reasons-global sea change, and too many barriers built for beaches.

But there's nothing didactic about these images.Â If Busey's message is environmentalist, it's an implicit one.Â "I'm never interested in making something that's a copybecause I think that if it's a beautiful image you could take a photograph and do it justice.Â I tend to take the essence of it and abstract it in some way. My feeling is that a lot of these places touch something familiar, even if we've never been there ourselves, and that's what I'm trying to capture."

Regardless of whether Busey's inspiration comes from the cross-section of a sycamore stem or the distribution of land and water in a river delta, there's a sense that we've known these patterns well, in our bones, all our lives. Busey traces her own connection to pattern to a most familiar place

"When I was growing up my grandmother had wallpaper," Busey recalls, "and I would lay for hours, I'd going up this way, and following the pattern and down again.Â Your eye sort of wants to do that."

Whether you're lying in bed in your grandmother's house, or studying satellite images of the Earth, from your studio in the basement.

Elizabeth Busey's exhibition "Considering the Beloved" opens with a reception this Friday from 5-8 pm at the Bloomington Convention Center Art Gallery. As part of the self-guided Bloomington Open Studios Tour Saturday, June 6 (10 am-6 pm) and Sunday, June 7 (10 am-4 pm), Busey opens her basement studio to visitors to see new work, enjoy refreshments and try their hand at printing.