When The Rain Stops Falling: A Parable 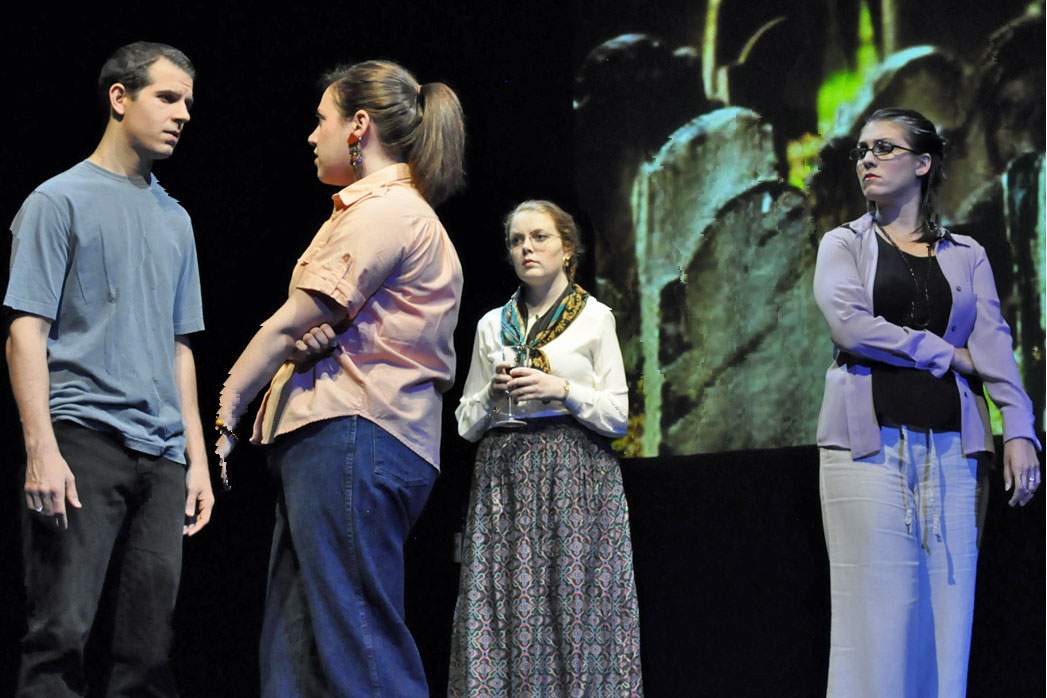 When the Rain Stops Falling at the Lee Norvelle Theatre and Drama Center is a wonderfully dark sweeping Law-York family story. In the production directed by Murray McGibbon intertwining threads of drama work their way to the surface. Some become darker, some actually bring on laughter. Mysteries are solved that the audience didn't even know were mysteries.

When the Rain Stops Falling begins and ends in Australia in 2039. As the show opens, rain-real watery rain with an errant fish-falls as the water curtains the stage as umbrella wielding cast members dash to and fro. Joe Stollenwerk as Gabriel York screams and then does an intricately played extended and far ranging monolog. Much of it focuses on the current rarity of fish.

From here it's back to the 1960s with Gabriel York's grandfather Henry Law, the perpetually flustered child molesting Clayton Gerrard, and grandmother young Elizabeth, Emma Wesslund. Despite her love for Henry she starts drinking and banishes him to Australia. In this four generation family saga, the scarred Elizabeth later appears as a fragile alcoholic played by Erin Mills

Their son Gabriel Law, a nicely straight Adam St. John, follows the trail of his errant father's once a year postcards to Australia.  There he falls in love, fathers a child and dies in a car crash in just a matter of a few weeks. His young love Gabrielle, a nicely restrained Rachel Goldman, marries a local farmer Joe Ryan, the steady Zach Decker. Gabrielle appears twenty-five years later in a frightening portrayal of mental deterioration played by Evelyn Gaynor.

In the final scene, it's back to the beginning in 2039 with Joe Stollenwerk as  Gabrielle's son Gabriel York, the grandson of Henry and Elizabeth Law. He's nervously welcoming the family's great grandson, his own long abandoned son Andrew, played with nice restraint by Kaleb Rich-Harris for a visit.

Parts of the cast gather round the table. Gabriel has cooked that fish that came with the rain in the opening scene and outside, the rain does indeed stop falling.

Andrew Bovell's When the Rain Stops Falling plays September 25th through the 29th in the Lee Norvelle Theatre and Drama Center.