Pierre Daura: Painting A Portrait Of Happily Ever After 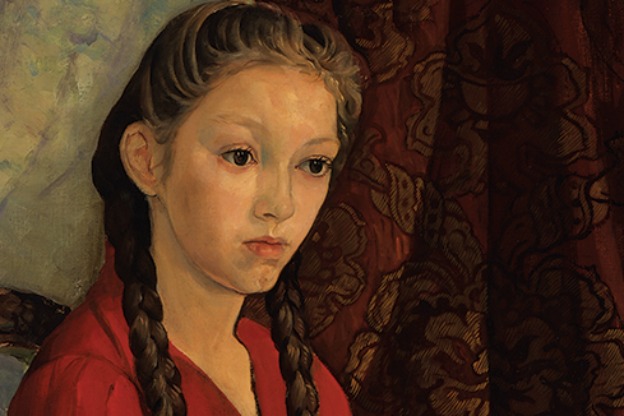 In 2001, the Indiana University Art Museum acquired a number of works by the 20th-century painter Pierre Daura, a Spanish-born realist who spent his adult life in France and the United States. Drawing upon Daura's portraits of himself, his wife and his daughter, museum director Adelheid Gealt has organized the exhibition Pierre Daura (1896-1976): Picturing Attachments, which will travel to three other university museums in 2015.

The story of Daura's life and work defies the prevailing narrative of the artist who thrives on romantic drama for creative inspiration. Take Picasso, for example, and what Gealt politely calls "his transitory relationships". The twentieth-century master is probably just as well known for his love-life as his pictures.Â "Picasso is an interesting case," explains Gealt, "because with each relationship a whole new narrative and sometimes, to a certain extent, even his style changed."

The extent to which an artist's personal life informs his or her creative process is a topic of ongoing research for Gealt. Â "Picasso was one of the artists who created the myth that artists' autobiographies and their creativity are entirely intertwined."

Perhaps because Picasso's autobiography was so colorful, the myth tends to equate artistic genius with the roving eye. So it may come as a surprise to stumble across a painter dedicated to his wife and child, whose autobiography was equally central to his creative enterprise. "When you walk into that gallery," Gealt asserts, "and see a show that's about three people-the artist, the wife and his daughterand you see how diverse it is, and unboring, and you're covering his whole lifespan, that's pretty remarkable."

They truly loved each other, and made each other happy, for a lifetime. That's the best thing that can possibly happen to anyone and it happened to an artist who expressed it in his work.

The remarkable story of Pierre Daura provides a refreshing alternative to that of Picasso, with whom he nonetheless shares a number of biographical similarities. Daura, whose works are currently on view at the IU Art Museum, was born in Spain in the late nineteenth century, and actually studied with Picasso's father as a teenager. Like Picasso before him, Daura came to Paris to further his art education, and fell in with an avant-garde circle. And, as with Picasso, there was romance. Â In 1928, he met and fell in love with Louise Blair, a well-born Virginian who'd just graduated from Bryn Mawr.

Here is where the Spanish artists' lives diverge. Unlike Picasso, Daura mated for life.

"Somehow or other it was a true love story," Gealt explains. Â "They truly loved each other, and made each other happy, for a lifetime. That's the best thing that can possibly happen to anyone and it happened to an artist who expressed it in his work."

So what does that look like? We can trace Picasso's love affairs through his parade of models and stylistic chapters, but for Daura, we get a view of happily ever after

'Throughout his life, no matter what stage it was, whether it was courting Louise, marrying Louise, enjoying the arrival of a child, about to leave for war, returning from war, being in exile end of life stagesâ€¦no matter what stage his life is in, there's a relevance creatively speaking to his own existence with his family. And that you don't see so often."

Daura's artmaking and family life were of a piece from the start. Within months of falling in love with Louise, Pierre gave her a self-portrait. The personal nature of this particular work of art becomes clear from their correspondence. Â Gealt found a letter written by Louise on which she made a sketch of herself in bed, with the self-portrait on the pillow beside her. Â "My dear Pierre," she writes, "I am kissing the self-portrait that you gave me."

In addition to giving himself to his beloved in painted form, Pierre worshipped Louise in paint, starting with their engagement portrait, and continuing with countless portraits of his bride in fancy dressmost frequently in the garb of his native Catalonia, and Spain. Â Pierre continues to paint his bride, albeit demurely, all the way through her pregnancy.

The birth of their daughter only amplified the couple's affection. Â "Martha was the apple of their eyes," Gealt reports. "The notebooks that I found were full of sketches of Louise nursing, Louise feeding the baby, burping the baby, the baby sleeping... it's just adorable!"

Daura the artist embraced the domestic sphere. By the time Martha was born the Dauras had decamped from Paris to a medieval house in the village of Saint-Cirq-Lapopie.

"For him, house and home and family were so intertwined," explains Gealt, "he actually sculpted portraits of his family on the timbers of the house and then he painted murals about Louise and Martha inside the house. He painted Martha's namesake-St. Martha-her legend in the hallway of the house, so he really bonded the house and the home and the family artistically."

But he also painted Martha on canvas. Pierre's formidable portraits of his daughter Martha are the crown jewels of the show.

In the portrait of Martha at 13, we see a young girl with long brown braids and a red shirt-dress, her intelligent face lost in the story her mother was reading to pass the time. He painted her again two years later, as a very young graduate from a high school in Lynchburg, Virginia, where the family had relocated. The graduation portrait showcases Daura's masterful representational abilities in tandem with a modernist sensibility. Â Echoes of Georges Rouault, Tamara Lempicka, Marc Chagall, and even early Lucian Freud place Daura well within the mid-century aesthetic, although his name is far less recognizable.

There have been at least two biographies written about Daura, and his paintings belong to collections around the world and in 36 museums across the United States. So why is he not better known? "That's an interesting question," Gealt reflects. Â "One possibility is thatÂ [the Dauras] very consciously left Paris at it's most influential time, when they were big-time players. They were with all the seminal artists and they chose this very quiet life in Saint-Cirq-Lapopie instead."

What this tells us is that good, solid, wonderful valuable artists were quietly creating in their own voices, with their own choices.

But not only did Daura leave Paris; he abandoned the foray into abstraction that he had initiated within his very progressive artistic milieu. This too, he may have done for love. "Certainly Louise is one of the influences that brought him back to the world of realism," Gealt explains, "and in that way he's like Picasso. You know, Picasso, after cubism, could have gone straight to abstraction. But I think for Picasso too, telling stories is far more enjoyable when you can create a pictorial language that tells that story one way or another. So I think for Pierre too, a referencing the people that mattered meant that you kind of wanted to go back to realism. So it was an emotional motivation that takes you back to another kind of art form."

Folding an artist like Daurawhose life took such a different path from his compatriot's, back into art history, not only challenges the archetype of the artist as Don Juan, but enriches the story of modern art. Â "What this tells us too," Gealt concludes, "is that good, solid, wonderful valuable artists were quietly creating in their own voices, with their own choices."

Discovering Pierre Daurawhose artistic estate has been disseminated to museums around the world over the last 15 years by his daughter Marthabegs the question of how many other archives of work by equally meaningful, yet relatively obscure artists might open up in the years ahead.

"I hope lots and lots! exclaims Gealt. Â "We're all the richer for it. Â The beauty about art is that there's room for all of them. Â Having Pierre Daura come in doesn't make Picasso or Jackson Pollock any less important. It just adds another voice to the chorus!"