Peter Pan, I Am Youth! 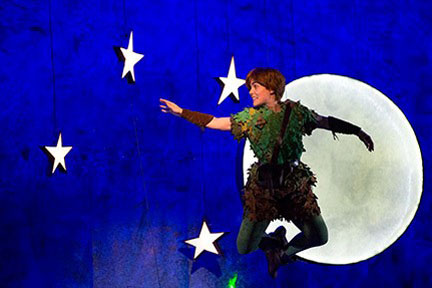 I'm George Walker for WFIU Arts and I really like Peter Pan. I'm always delighted when the Darling children learn to fly. I clap as loud as I can to save Tinker Bell and signal my belief in fairies. I'm regularly in tears as the ever youthful Peter returns to the aged Wendy. And, at least for the duration of the show, I'm "me, not I."

The Cardinal Stage Company's production directed by Amiee Turner is a fine addition to the many outstanding and moving productions of J.M. Barrie's story of perpetual youth, fun and adventure. The opening scene of the Darling's tranquil bedroom is under the moon lit, starry sky is just the first of designer Ken Martin's creatively rendered designs.

Saturday night, balances between the orchestra, the children and the narrator took a couple of minutes to lock in, but the sound for the show is very good. Olivia LaBarge as Wendy is a charming older sister for Ian Shaw as John and first grader Kenneth Bardonner as Michael.

Susann Ellenwood is a warm figure as their mother and  the wife of the sometimes difficult Mr. Darling. Mike Price is very funny as the beleaguered Darling's father overwhelmed with life's difficulties and the mysteries of tieing his tie.

Azaria Wagner was very funny on all fours as the family's nurse Nana the dog and later on his belly as the Captain's fearsome crocodile.

In the quiet of the night, as if by magic, the shutters open and Peter flies into the room. Emma Rosenthal is a fine Peter Pan. She's a thoroughly believable actor and singer, a very graceful flyer and a delightfully cheeky boy. It's interesting that she had her grounding playing Molly in the prequel, Peter and the Starcatcher.

Armed with happy thoughts and fairy dust, Wendy, John and Michael join Peter to fly to Neverland. Although the story maintains that it is only boys who fall out of their carriages…girls are much too smart. There is a good sprinkling of boyish girls in with the personable double cast island crew.

Peter and the boys are always on the lookout for their arch enemies, Captain Hook and his pirates. Peter's ally Tiger Lily is Cassia Scagnoli. She led a nicely varied and athletic troupe of Warriors in a spirited performance of Ugg-A-Wugg and the Pow Wow Polka.

Mike Price in a colorful piratical costume, but with same silly moustache of Mr. Darling appears as Captain Hook. He's a dashing delightfully flamboyant figure with plenty of dramatic flourishes. At the same time he's occasionally conflicted in a neatly nuanced portrayal. Connor Starks who recently appeared as an amusing captive in IU's Peter and the Starcatcher was the Captain's amusing and much put upon Smee.

Hook's comically bad band of buccaneers each had their own special character and individual moves. They are always ready to do his dirty deeds. They're also ready to accompany him in tangos, tarantellas and waltzes.

Peter Pan directed by Amiee Turner and conducted by Brian Samarzea was a pleasure to watch and enjoy. There were plenty of clever dramatic scenes with a nice integration of  dance choreographed by Diane Buzzell. Costumes by Jeff Shearer looked good on everyone with plenty of variety for the pirates and the boys and unity for the warriors.

Throughout the evening Ken Martin's set designs allow the action to flow smoothly and creatively. I enjoyed watching the boy's cave home turn round to be a pirate ship and was amazed at how quickly everything in the Darling children's bedroom disappeared in the first act and reappeared for the finale.

The Cardinal Stage Company's delightful Peter Pan plays in the Buskirk Chumley Theatre through December 30. You can find this review and an interview with director Amiee Turner on our web site at WFIU.ORG/ARTS