Musician Learns About Himself While Relearning His Instrument 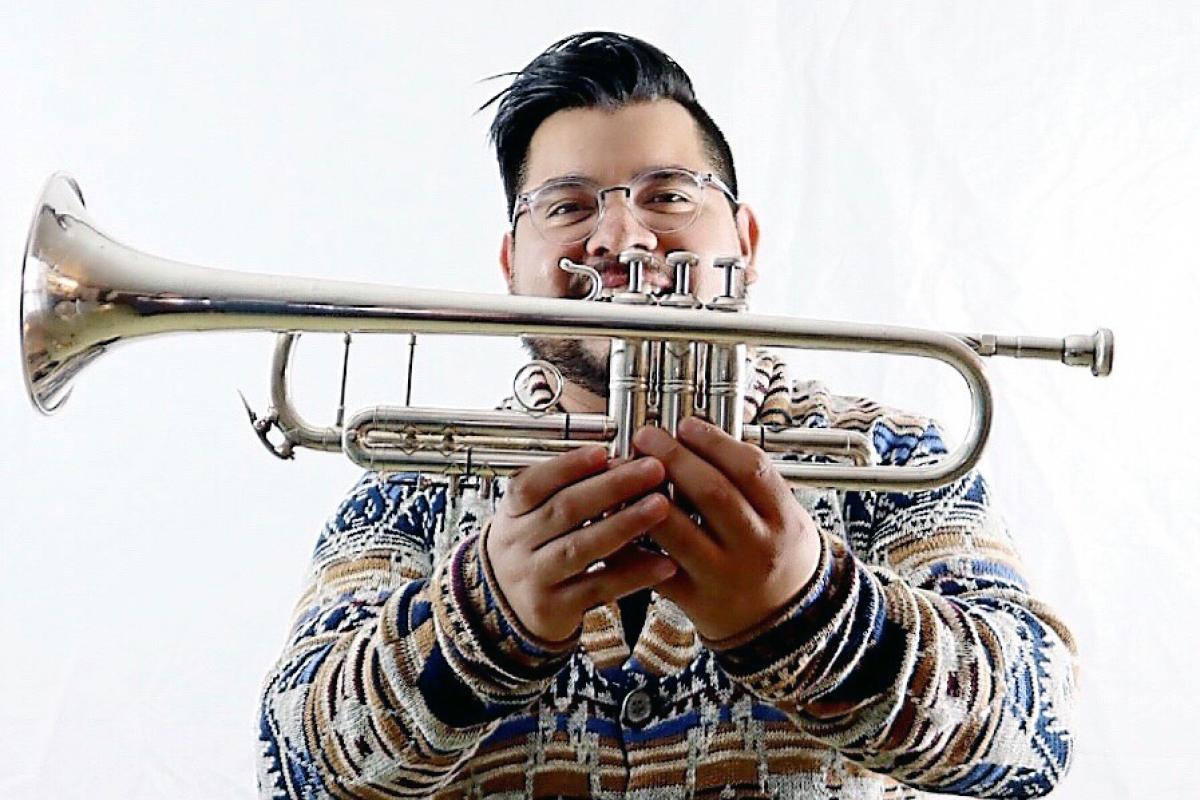 Jonathan De La Cruz remembers learning to play the trumpet in a Pentecostal church in Mexico. De La Cruz, who grew up in Eagle Pass, Texas, said his family crossed the Rio Grande by bridge multiple times per week in order to attend services at their church.

"My first lesson at church was, â€˜Play a note while the band is playing and if it sounds bad, just change it,'" De La Cruz said. "I was playing without the worry of messing up because I wasn't introduced to that idea."

De La Cruz played the trumpet in church from seventh grade through high school. He said his skills dramatically increased through this experience.

"In this church you play every kind of music imaginable," De La Cruz said. You play funk; you play rock, rap, reggae, tejano, salsa, bachata, anything you can think of. I had to learn how to play all those styles."

De La Cruz went on to join his high school band where he was invited to join the band director in a professional tejano music group. De La Cruz said his first travelling gig with this band was both exciting and terrifying since he was only 15 and had never left home before.

"We got into this huge bus that the band owned," De La Cruz said. "We played in the middle of nowhere Texas at an event center that didn't have an air conditioner and didn't have toilets. That's what I remember; that's where I started."

After high school De La Cruz went to Texas A&M University-Kingsville, where he studied music education and played in the marching band. After graduation, De La Cruz was invited to play a high-profile gig at the Selena Festival with Chris PÃ©rez, the famous guitarist and husband of the late Selena Quintanilla.

"I had never played at such a high level with such high-level musicians," De La Cruz said. "We could literally go to the back, open up a new case of a speaker, guitars or wireless mics and just take them. It was like, â€˜wow,' this a real big gig."

In 2016 De La Cruz was accepted into a master's program at the Jacob's School of Music in Bloomington, Indiana. De La Cruz was excited because he was selected to be in the top jazz performance band at IU, but when he arrived in Bloomington something happened that was not so exciting.

"I couldn't play," De La Cruz said. "I had played in so many ensembles at the same time that I wasn't taking care of the muscles of my lips."

Under the guidance of IU music professor Pat Harbison, De La Cruz began using a new mouthpiece for his trumpet. In order to adjust to the new mouthpiece, De La Cruz had to change his embouchure, the way he held the trumpet to his lips. De La Cruz said the transition was a grueling process.

De La Cruz met with Harbison for six hours per week to practice playing notes with the new mouthpiece. De La Cruz said it was difficult in the beginning to even play just one note.

"I had been able to play for such a long time and I had this huge successes in my career at an early age and then I couldn't play anymore," De La Cruz said. "The atmosphere was just relearning everything from how I thought musically, how I thought about myself, how I perceived people, how I carried myself, everything."

Although the new mouthpiece required De La Cruz to change his embouchure, Harbison said he is typically wary of telling students they need to make an embouchure change.

"It tends to make somebody sort of hyper aware or self-conscious when they play," Harbison said. "I kept saying, â€˜I don't want you to think of this as a revolution' because embouchure changes usually mean destroying the existing structure and rebuilding and I didn't want to do that."

Harbison said De La Cruz is very thoughtful and had to work through his tendency to overthink his transition to a new mouthpiece.

"Even if you intellectually believe you are on your way to a better thing, there's that identity crisis that happens when you sort of have one foot in one boat and one foot in the other boat," Harbison said. "I watched an enormous amount of personal growth; sometimes you go through a painful experience of some kind and you discover things about yourself that turn into life skills. You learn something about yourself that is bigger than the experience of changing the position of the mouthpiece on your mouth when you are playing."

"I've made some huge strides," De La Cruz said. "Sometimes it feels like I struggle so much to play and I want to quit and some days everything works and I sound great and I am excited for my career."