Mid Summer, A Good Time For A Dream 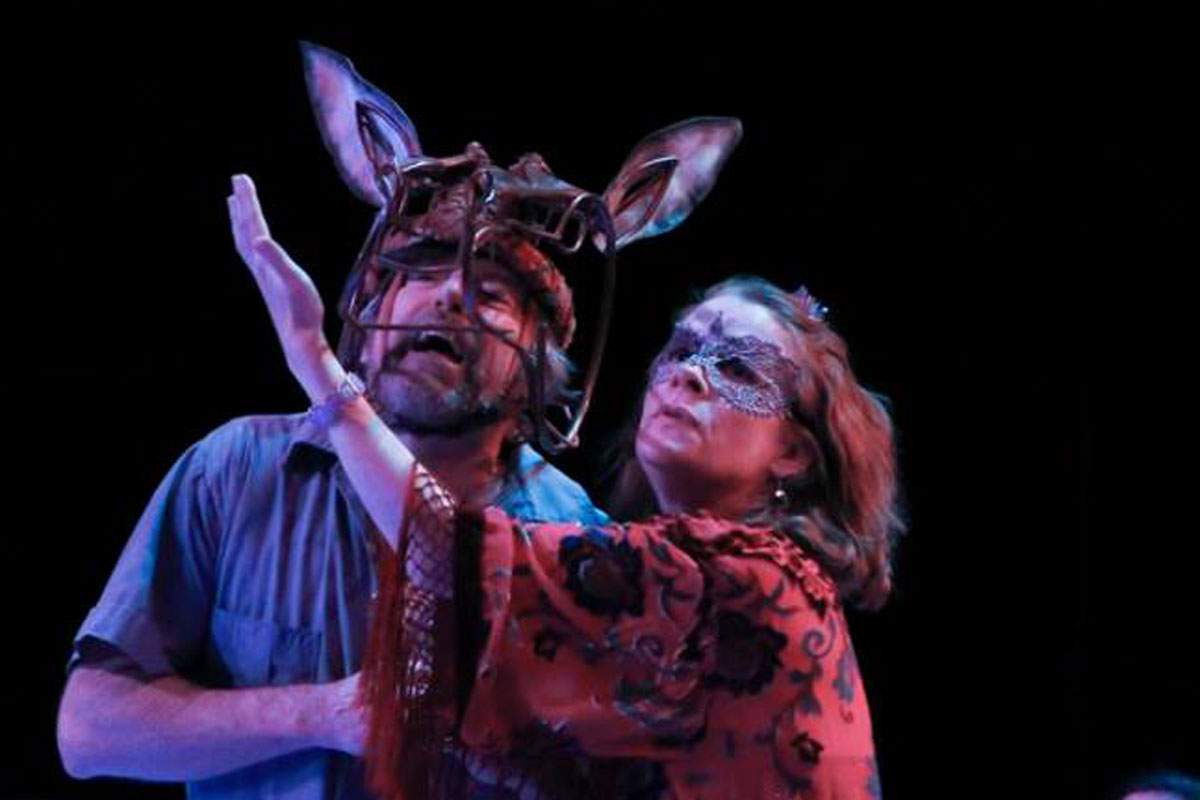 As the IU Summer theatre's production of Shakespeare's A Midsummer Night's Dream opens, Hippolyta, Jenny McKnight, the defeated Queen of the Amazons is delivered to Duke Theseus Grant Goodman, in hand cuffs. The cuffs are quickly removed and she seems to be a rather good sport about the whole thing.

No sooner does Theseus declare their marriage "four days hence," than he's called upon to judge a marriage dispute. Egeus, Justino Brokaw, demands that his daughter Hermia, Ashley Dillard, marry Demetrius Jason Craig West. Hermia wants to marry Lysander, Nicholas Jenkins. Demetrius loves Hermia, so he's fine with it. The fourth member of the young lover is Helena, Amanda Catania, she's in love with Demetrius. Theseus sides with the father and gives Hermia the choice of Demetrius or a nunnery.

Hermia and Lysander elope out of town and get lost in the enchanted forest. Demetrius follows them and Helena follows him. With help of the king of the fairies, Oberon, Grant Goodman again and his Puck, a cat likeTara Chiusano things get mixed up. Both Lysander and Demetrius fall in love with Helena. Helena is baffled by this and very upset. The abandoned Hermia is even more baffled and upset. It's a wonderfully emotional energetic and gracefully choreographed scene…and so high school.

Meanwhile the community theatre group is putting together a play for the celebration of the wedding of Theseus and Hippolyta. They're usually called the ‘rude mechanicals,' but I like the title the "hempen home spuns." Ian Martin is the organizer and leader of the production of the mirthful tragedy of Pyramus and Thisbe. He and his cast; Katie Horwitz, Zach Decker, Justino Brokaw and the cart wheeling Joey Kelly are a charmingly varied group. David Kortemeier as Bottom is the most rambunctious of the players. He's ready to play any and all the parts. Whether you've ever been in a bit or theatre or not, it's a delightfully funny headache for Ian Martin.

At the same time Oberon is having a bit of feud with his fairy Queen Titania, Jenny McKnight. He and Puck put an asses head on Bottom and with more of their magic make the queen fall in love with him. Their scenes together are richly funny.

As things come to fruition Oberon and Puck put things right. The spell is removed from Queen Titania. The asses head is removed from Bottom and she and Oberon are reunited. The young folks are sorted out, re- pairing the lovers Hermia and Lysander and linking Helena with her Demetrius. The

At the evening of Theseus and Hippolyta's wedding they're joined by the two couples and all enjoy the props, malapropos and comedy of the home spun's play.

A Midsummer Night's Dream continues in repertory with Sense and Sensibility through July 23.