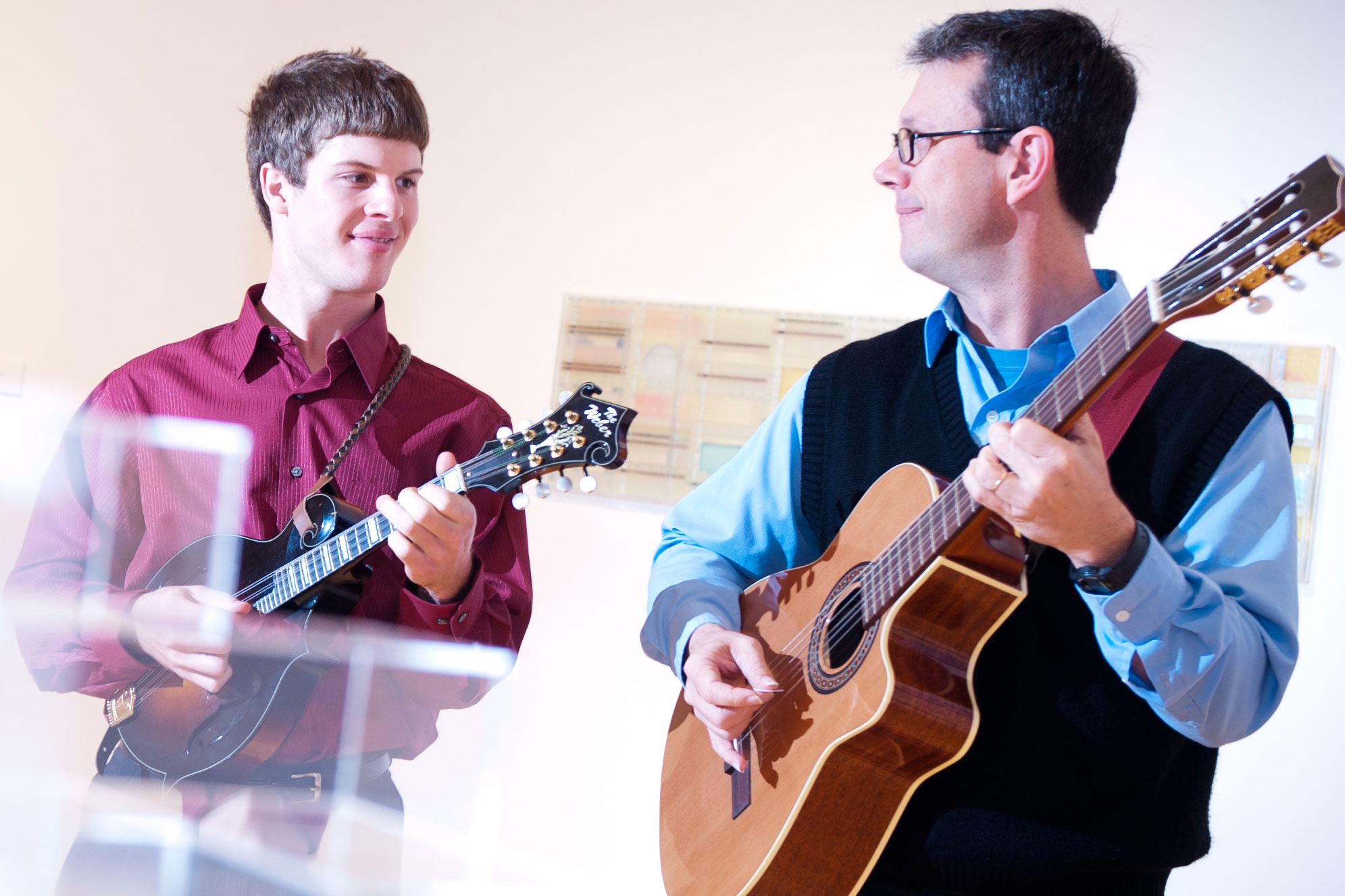 Indiana State University student Solly Burton is the first music student at the school whose principal instrument is the mandolin. It might have been violin…or perhaps fiddle.

"Yes," says Burton. "When I was nine, I was working on the fiddle, but we found a mandolin at a yard sale and that was it for the fiddle."

Playing With One Another

Burton studied with Terre Haute's Louis Popejoy, a teacher who scheduled regular jam sessions for his students. "We'd get together onstage at a local pizza place and this gave all of us a chance to play with one another."

Playing Against One Another

These get togethers seem to have sparked a competitive streak in Burton. "I'd go to the local contests and see what other players were doing. Sometimes I'd pick up things." Local and state contests led him to Winfield, Kansas where he's won the national title twice. Back home as a two time state winner, he had to sit out the Indiana mandolin contest, so he entered on guitar and won on that as well."

The  Jazz Bug With A French Accent

Although, Burton's background was in traditional and bluegrass music he has open ears. "When I was about seventeen, I heard my first Django Reinhardt recording and I started playing more of that gypsy-jazz."Burton and a friend were playing at a local dinner when Indiana State music faculty member and guitarist Brent McPike sat in. As McPike remembers, "We played Django Reinhardt's "Minor Swing"."

Another Country Heard From, Brazil

About a year later, Burton enrolled as a music/business major at Indiana State University with McPike as his teacher. "Solly, was already very accomplished on his instrument and he has a wonderfully curious mind. He's very open. " says McPike. The teacher used this openness and his own varied background to introduce Burton to music of Brazil. "I'd had the opportunity to play a lot of that with Marcos Cavalcante while I was a grad' student in Bloomington. We played at the first Lotus Festival. The Brazilian choros are a wonderful genre of music and there's a rich mandolin tradition."

In addition they work on music from the classical tradition as well. "We've been playing some Mozart violin duos that I've transcribed and a Beethoven sonatine that was originally for mandolin and keyboard." Although Burton has taken music theory and does read music, he still describes himself as mostly an ear player. "When we started the Beethoven, I went to the computer to listen to it. I use the music as a reference, but I do better when I'm playing from memory."

Burton is now a twenty year old, still an undergrad at ISU. He's already explored a wide variety of music, but he's far from stopping. "I see myself learning more of the Brazilian and the jazz and even the classical. Just getting better," is how he sums up his plans.

Listen to the second half of the interview with Solly Burton.