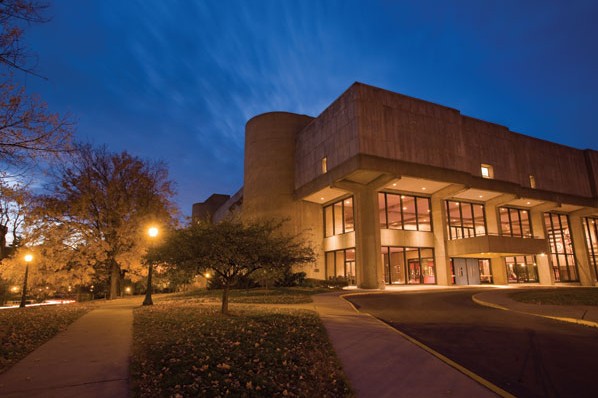 The IU Philharmonic Orchestra will perform a program of Russian music under the baton of guest conductor, David Hayes.

The evening will begin with the most recently composed work, Alfred Schnittke's 1985 composition (K)ein Sommernachtstraum. The title is a joke at the expense of German and Shakespeare. "Kein" in German means "not," so a rough translation is "(Not) A Summer Night's Dream." Schnittke is known for his eclectic style, which was not favored by Soviet arts authorities, but has an easy appeal for modern audiences.

(K)ein Sommernachtstraum makes sly nods to Shakespere's A Midsummernight's Dream by opening with an elegant minuet to suit the courtly setting of the play. Soon, though the dance become dissonant, and Schnittke inserts a perverse quote of the Minuet from Haydn's Symphony No. 103. Swirling strings and brash brass statements usher in tutti sections followed by a return to the opening minuet to close the work.

The Violin Concerto in a minor, Op. 82 of Alexander Glazunov is next on the program. The soloist will be violinist Rena Kimura, winner of the 2012 Jacobs School Glazunov Violin Concerto Competition. Kimura is a student of Kevork Mardirossian. This lushly orchestrated work, composed in 1904, owes more to the composer's late Romantic predecessors than his early modern contemporaries.

The concerto consists of three movements, performed without pause. The opening movement has long melodic lines and occasional bursts of virtuosity, while a challenging cadenza makes use of the violin's many voices. The second movement is calm, offering a needed respite before the jubilant and technically demanding third movement. With the orchestra sparkling in the background, the violin develops an appealing melody that explores the whole range of the instrument.

Tchaikovsky's Symphony No. 6, subtitled "Pathétique," rounds out the program. Completed in 1893, this work is the last of Tchaikovsky's symphonies and offers a range of emotions to the listener. The composer died of unknown causes only nine days after conducting the premiere of this symphony. This circumstance, and the ambiguous program of the work (as compared to explicitly programmatic nature of some of his earlier symphonies) has led to much speculation over the years. That death was on the composer's mind, as suggested by some biographers, is supported by his use of melodies and rhythms from the Orthodox funeral service.

The first movement opens in a sombre mood, followed by the introduction of the main melody in the woodwinds. Tchaikovsky's clever thematic development and varied but distinctive orchestration is the rule in this excellent example of his late style. Whether or not Tchaikovsky was in a morbid mood when he composed this work is more disputable in the context of the inner movements. The second offers a lovely melody in 5/4, an unusual, somewhat off-balance meter that gives the music a lighthearted feel. The third movement is a virtuosic march, full of frenetic energy and humor and ending with finality worthy of a final movement.

The symphony concludes with an Agadio lamentoso, reinforcing the work's reputation as a reflection of the composer's dark state of mind. Though we cannot know what Tchaikovsky was thinking, this movement does return to the same kind of deep pathos as the first and ends quietly, as if to negate the optimism of the inner movements. This IU Philharmonic concert offers a varied perspective on Russian music, traveling back through time with each work on the program and showcasing three different composers with a shared heritage.