Halpern And Johnson: Men In Love And In Marriage 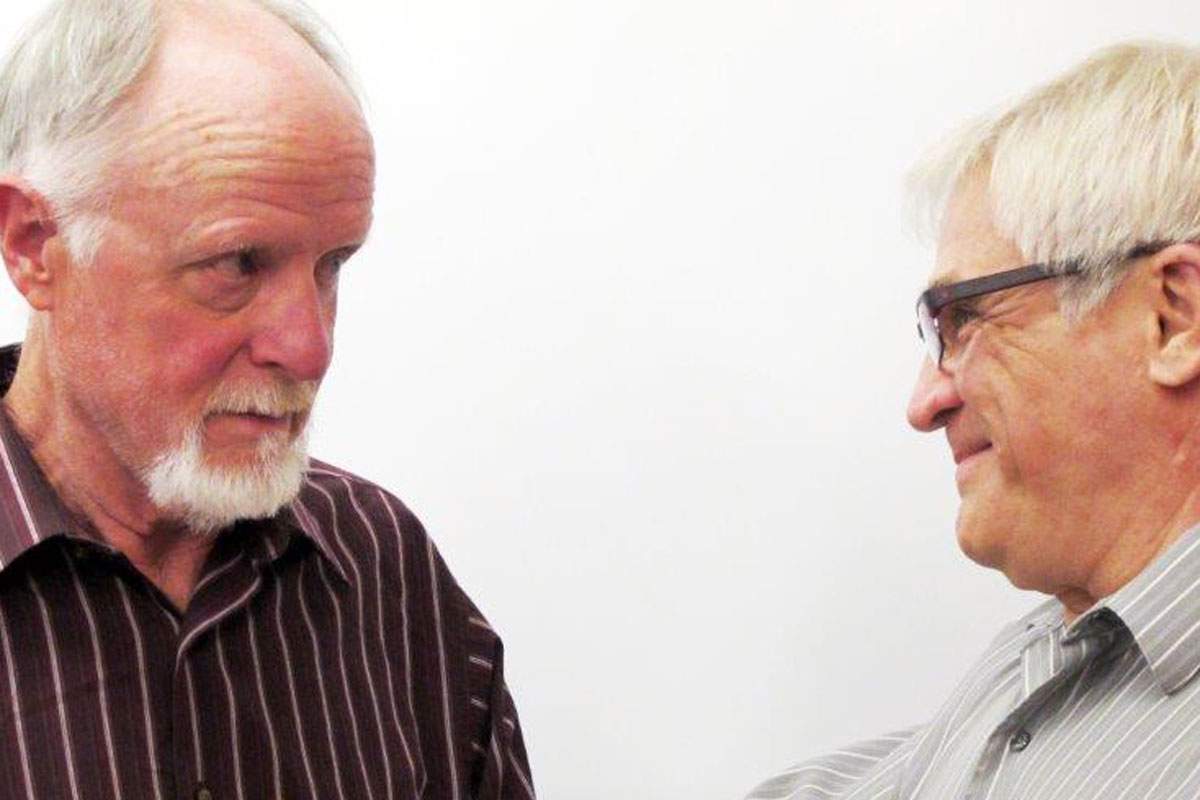 The Jewish Theatre of Bloomington's Halpern and Johnson in the intimate Rose Firebay of the Ivy Tech John Waldron Arts Center is a richly involving and rewarding account of the love that two men had for the same woman. Their gradual opening up and understanding is an adult drama.  Adult in a good way.

The play opens as Halpern, Ken Farrell stands beside the new grave of his wife, Flo. Johnson, Gerard Pauwels approaches with a bouquet of flowers. Halpern is not happy about being interrupted and the two fence about their rights to be in the cemetery. Johnson is quite uncomfortable and oblique and the play seems to take a long time for even a partial explanation. At one point Halpern cites, "a complete misunderstanding in the space of half a minute." It's only in the next scene that at least a partial explanation is offered.

Now I said, there's love for the same woman, but for Halpern who married her and Johnson who didn't she was quite a different person. The nineteen year old Johnson  was infatuated with Florence from the moment he saw her angelic face framed by her hair as she cut cloth on New York's lower east side. They courted seriously, but her father wanted Jewish grandchildren and the upper class Catholic Johnson though flexible was unacceptable.

While the girl was Florence for Johnson, for the more suitable Halpern she was Flo' and the differences persisted over the years during the steady day to day of her marriage to Halpern and her thrice yearly luncheons with Johnson.

As Halpern learns of these trysts, these visits that she kept secret he is furious. Ken Farrell is quite mesmerizing in his passionate outbursts. He accuses Johnson of stealing his life and maintains that despite all the outward regularity of his marriage, her deception poisons his memories.

He's further incensed when Johnson describes a very different more gracious Florence than the picky Flo' that he catered to every morning. Each man saw different sides of this same women.

The revelations are accompanied by plenty of passion on the part of both men and Pauwel's remembrance of singing a song with her is so moving that it's a relief when the lights go down to end the scene.

The two men are on stage together during most of the play and it's a tribute to the director Katie Horwitz and the actors that there's never a moment when that seems anything but a strength.

Halpern and Johnson is a warmly human, moving and often funny  exploration of the boundaries and barriers of  male experience of courtship, of marriage and of love. It's also the sort of play that leaves one wondering about how we see other people and perhaps even how they see us.

The Jewish Theatre of Bloomington's production of Lionel Goldstein's Halpern and Johnson in the Ivy Tech John Waldron Arts Center's intimate Rose Firebay plays May 14, 19 and 21 at 7:30 pm and May 15 and 22 at 3 pm