Godspell, Parables From The Turbulent 70s 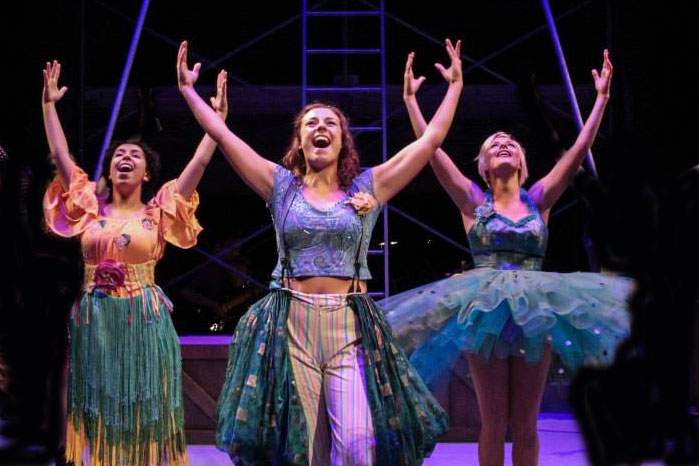 The Indiana Festival Theatre opened their summer season with a special performance of John-Michael Tebelak and Stephen Schwartz's Godspell for IU's Mini-University.

In 1970 John-Michael Tebelak was at Carnegie Mellon University working on his senior thesis. Tebelak was angry at the empty rigidity and stiffness of his Christianity.  He wanted something that combined the easy camaraderie of an anti-war rally with the fun of a youth group picnic and an improvisational spirit that harkened back to the happenings of the 60s. Following  successful initial performances at his school and off-off Broadway in New York, Carnegie Mellon grad composer Stephen Schwartz was brought in for music and the setting of new lyrics and Godspell went on to many successful productions.

The ten member cast is a talented group of singer-dancer-actors from IU's Musical Theatre program. The first act is mostly a series of skits of the parables from gospels of Mathew and Luke. There are mini-plays, a blanket toss, puppets, and even a game of charades with volunteers from the audience.  The atmosphere is mostly light hearted with occasional serious scenes and even a bit of irony. Kelsey Shaw gets to do a lovely job of singing the show's hit "Day by Day."  Caleb Fath and Colin Schreier as Jesus and Judas do an intricately voiced and danced 20s sounding "All for the Best."

The second act is darker. Kayla Eilers does a nicely torchey version of "Turn Back, O Man."  Jesus dramatizes the separation of people into the saved sheep and the condemned goats. In a neatly dramatized scene a stacked trio of black gowned judges interrogates Jesus.  Following Judas's singing of a song about the Jews lamenting their captivity in Babylon, there's the betrayal and the crucifixion.

George Pinney is the director and choreographer and there's plenty of action.  Especially if you choose the balcony seating in the Wells-Metz, you'll be treated to quite a display of geometry along with the more intimate and the free form movements. The production has a rather hard edged sound that does occasionally overwhelms the singers. Musical director Terry LaBolt always keeps things moving as he conducts from the keyboard.

Regular performances of Godspell begin Thursday the 12th and continue through Sunday the 29th.  Schoolhouse Rock joins the Indiana Festival Theatre on the 21st. Shakespeare's Twelfth Night opens on July 5th and is joined in repertory by The Miracle Worker on July 11th.