Digging Up Bones: One Man's Hobby 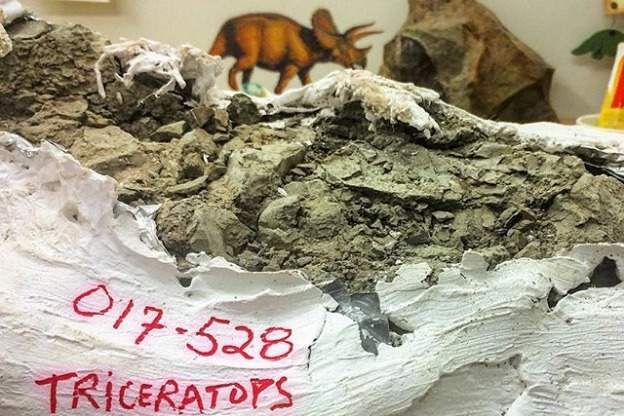 Steve Bodi is in his garage in Martinsville. His garage looks like a brick auto body shop. The type of place you might expect to see an old vintage car up on blocks. Inside, Bodi is carefully working on something much, much older.

"See, we've cut through the plaster and layers of burlap," Bodi says. "There were only a couple on this."

He clears some dirt, pauses, and reveals what he's working on:  "Dinosaur bone."

Out There For The Digging

About five or six years ago, Steve Bodi's brother-in-law kept bothering him at family get-togethers. "He would say, 'Come on, Steve, you have to come with me.  We'll go out west and hunt for dinosaur bones." At first Bodi didn't believe they could just head out and dig up real dinosaur bones.

Dr. Liz Freedman Fowler is former director of the Great Plains Dinosaur Museum in Malta, Montana. Fowler is an expert on paleontology in the American West."If you're in the right area, you'll walk over dinosaur bones every couple of minutes" Fowler explains. "Dinosaur bones are incredibly common in eastern Montana. Fragments, mostly on the surface, but those fragments often lead you to bones that are in the hills."

We can't cover every square foot of ground with a professional paleontologist. Paleontology couldn't move forward without amateurs.

As it turns out, there are dinosaur bones in western states like Wyoming and Montana. Museums, universities, and hobbyists flock to this area of the country to find fossilized treasures. But a lot of dinosaur bones are on federally owned land. Fossils on federal land are reserved for museums and universities. This makes things complicated for hobbyists like Bodi.

"For amateurs to dig up dinosaur bones," claims Fowler, "they have to make arrangement with rancher to be allowed to dig there and find the fossils."

When Bodi and his brother-in-law started driving out west in search of dinosaur bones, they first talked to local ranchers, trying to get permission to dig on private land.

The areas where they dig are rural and sparsely populated. Bodi says they meet people and build trust over time. But after a few years of digging, Bodi and his brother-in-law have some tricks up their sleeves.

Bodi's brother-in-law, Mark,  owns a chocolate company and he brings chocolate with them. "The biggest burliest cowboy-rancher you ever met just kind of melts when Mark starts pushing chocolate on them," Bodi jokes. "Those chocolates have opened more doors than I would have ever imagined."

After a few years of digging, Bodi and his brother-in-law found a full dinosaur skeleton. It's called a Hadrosaur, or Duck-billed dinosaur. They named the dinosaur Juliette.

Over three field seasons, Bodi and his brother-in-law excavated Juliette. They followed proper archaeological procedures and wrapped the entire area around the skeleton in burlap and plaster to protect it. Finally, they drove the entire dinosaur skeleton back to Bodi's garage in Martinsville.

Bodi stands next to the 20-foot trailer that holds Juliette. Bodi explains that the specimen is special not only because it is large, but because it's a fully articulated dinosaur. That basically means, all the fossilized bones remained undisturbed exactly as when the animal died.

"Our dinosaur clearly got buried in something very quickly," Bodi says. "Even an amateur like me could easily follow the bones."

Fowler explains that amateur finds, like Juliette, do comes along every few years and they are important to the field of paleontology. "We can't cover every square foot of ground with a professional paleontologist. So if [amateurs] collect good data and work with paleontologists, there have been huge finds. Paleontology couldn't move forward without amateurs."

Bodi spends evenings in his garage preparing Juliette's bones. He holds the bones in his hands as he picks and scrapes. It's a painstakingly slow process.

"It's easy to not believe it's real. I mean you can see bones in a museum, you can see artists rendering or cartoons, but it's kind of easy to think I'm not sure this is true," Bodi says. "And so, maybe there's some mystery because of that."