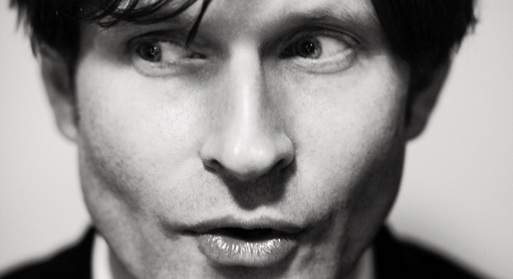 The film actor Crispin Glover became known in the 1980s for such unconventional characters as the morally ambiguous teenage ringleader in River's Edge and the nebbishy dad in Back to the Future. In recent years, movie-goers have been treated to similarly outlandish performances by Glover in such mainstream material as Charlie's Angels and Alice and Wonderland, and the smaller films Willard and Rubin and Ed.

At the same time, Glover has been making his own extremely unusual films, which he presents at select cinemas around the country, along with a narrated slide show of his visual art.  Crispin Hellion Glover's Big Slide Show (as the live portion of the evening's entertainment is called) pairs the actor's narration with projected images of pages from extensively manipulated nineteenth-century books.  Bearing such titles as Rat-Catching and Oak-Mot, the  reworked, decoupaged vintage texts Glover has been making over the last twenty-five years seem to have their roots in the collages of  Max Ernst.

Indeed, the spirit of Dada and the Surrealists is never far from Glover's idiom.  A self-professed devotee of Luis Buñuel, Glover's own films promise the same blend of the macabre and the absurd for which the Spanish director was known.  The first in a trilogy, What Is it? (2005) is cast largely with actors with Down Syndrome, although that is not its subject.  Glover's second film, It is Fine!  EVERYTHING IS FINE (2007) is based on a  semi-autobiographical screenplay by Steven C. Stewart, "a man with severe cerebral palsy and a fetish for girls with long hair."

The films emerge from Glover's "psychological reaction to the corporate constraints that have happened in the last thirty years or more of film-making, wherein anything that can possibly make an audience member uncomfortable is necessarily excised, so that film will not be corporately funded or distributed.

"I think that's a very damaging thing," Glover elaborated,"because it's that moment when an audience member sits back in his chair and looks up at the screen and thinks to himself,  'Is this right what I'm watching?  Is this wrong?  Should I be here?  Should the filmmaker have done this? What is it?'  And that's the title of the film.  In other words, what is it that's taboo in the culture?  What does it mean when the taboo has been ubiquitously excised?"

"It's those moments when audience members are asking questions that there's real education," Glover explained.  "And that isn't  happening in our media culture right now.  And what is the opposite of education, really?  It's propaganda."